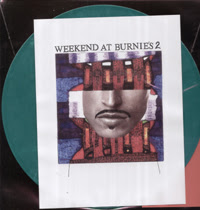 Another week, another Sunburned release. For those who don't know, Sunburned Hand of the Man is a collective of friends based in Western Massachusetts who have been blamed for kick-starting the recently deemed non-genre of New Weird America. Wire magazine may have thrown these guys on the cover, but that hasn't stopped them from continuing on their own path, and Weekend at Burnie's 2 only delves further into the band's loose, drug-induced improv-rock.

Did I say improv-rock? Maybe, but don't go sliding this one between your parents' King Crimson and Yes records. Sunburned instead pulls heavily from their New York brethren, No Neck Blues Band, and opts for a completely fried sound, full of scatter-brained percussion and bass heavy grooves. Over these grooves, any circuit-bent bleeping and stoned vocal ramblings easily find their place, giving the group its surprisingly versatile capabilities — indeed, they've rightfully been compared to groups as disparate as Funkadelic and The Dead C.

Actually, Weekend at Burnie's 2 represents a bit of a switch for the band, primarily highlighting the vocal antics of percussionist John Moloney and bass-guru Rob Thomas. Switching between wonderfully aimless ruminations about anchors on "Burnie's Anchor" and Godz-style distressed sludge-rock (see "There's a Whale in the Sky"), the album resists the instrumental breakdowns that the group has become known for. Instead, the tracks are culled from various studio sessions held over the last couple of years, making this less of a snapshot of the band right now and more of an exploration of this particular aspect of the group's sound.

The album is a split release and, as far as I can tell, their first on both Lost Treasures of the Underworld and Blackest Rainbow. Partially responsible also is the band's own label, Manhand. Maybe not the best introduction to this gang, but for those willing, it's one of many sides to explore from this killer noise-making unit. Limited to 500 copies, with each hundred printed on different colored vinyl, so hurry. "The ice cream man is dead" indeed.
Posted by Henry at 8:45 AM No comments:

A Brief Introduction I Suppose...

This being my first shot at this whole blog thing, I guess I should give a quick syllabus of what exactly I'll be dragging my fellow music victims into here. Being a music history major isn't exactly the doorway to the kind of vinyl-obsessive culture that I partake in, so I needed an outlet for all of the minutia lying around my room. I'll be posting on here as often as I can about whatever I feel--sometimes new, sometimes old, sometimes good, and often not... Some of my posts will be featured on Blog Critics (those will probably be the properly written, grammatically correct, tidy little fuckers), and I also write for All About Jazz, but this will ideally be where I'm able to write the way I want to about what I want to. I guess we'll see just where this leads.
Posted by Henry at 8:40 AM No comments: