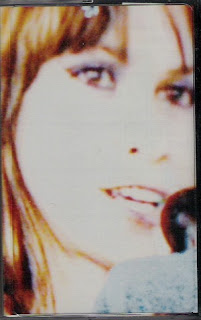 So much stuff on the back burner right now but I had to slip a plug in for this one. What a tape! First off, amazing cover, so weird and washed out and, well, Alanis. Then the title, which is about is descriptive as it could be. And then the sounds, which are exactly what the title says they are. Literally, this tape consists of a number of Alanis Morissette tunes playing while whoever the brilliant mind behind this release is rips angular, vaguely congruent lines along with her. Is this Zac Davis' genius and super secret guise? If only.

Best of all is that all the hits are included--"You Oughta Know," that one about how "You've Already Won Me Over," "Isn't it Ironic," the works. So if you're an Alanis fan, you're already set. If you weren't previously, these solos might bring new light to just how forward thinking Alanis really was.

Shit. Who am I kidding? This stuff sucks. But boy is it made better by knucklehead riffage on top...

Best of all is that by doing this obscene recasting of Alanis, this dude has managed to actually make me sit through four songs of late 90s alternative rock wankery. Wasn't this album one of the top selling albums ever or something? How can that actually be? And why isn't this one trumping it in sales? The questions just keep coming... the last track claims to be Alanis with Health, which basically means laying a technoish beat and weird vocal line from Health over "Thank You," a heart warming close to the tape. Irreverent? You bet. Not lined up in any way? Absolutely. Strangely compelling in its complete dismissal of forms from all parties? Ay ay Captain, ay ay! Tape concept of the year. Hope he doesn't get sued.
Posted by Henry at 8:46 AM No comments: 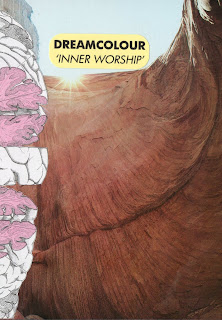 Wow, what a month... have been sliding into this new teaching position like velcro on concrete. Trying my best just to keep my head screwed on straight and make a point of actually going back up to my apartment and grabbing some time with yours truly... been tough to rally in those situations though. Now that things are settling down a bit though, and some semblance of a groove is taking shape I figured it's a good time to get back into making some time for some of the amazing stuff I've been receiving lately. Had to start with this one, as it represents two of my recent aural habits--though Stunned surely is more than a habit at this point... a lifestyle perhaps? Still, the merging of Stunned and Dreamcolour makes all too much sense, and Dreamcolour's Alex Gray fortuitously got in touch with me around the time of this release to drop me a copy of an Earjerk tape they did too (surely to come soon). Got to talking, and now Alex is gonna be doing a solo effort for Wet Merchants, so all's well that starts well eh?

As for this particular victim, it fits right in both with the Stunned and Dreamcolour modes of operation. For those who don't know from Dreamcolour, this is a pretty mega group of like-minded musical thinkers. Seems like a rotating cast too, pulling anyone in who's willing to partake in the free gloop of the group, which pulls psychedelic sheets over the eyes of post-Fire jazz squall. Almost like some Alan Silva orchestra or something, only with less virtuosity and thus a more frayed and unexpected sound. Sort of an Arkestra meets LAFMS situation, never ungrooving but rarely just soothing. And at an hour in length there's plenty of room to slip down into their world.

This is especially the case on the half hour opening, "Praying." Starting with a clattering and moist opening, the piece glides back and forth from stretched landscapes to bubbling masses of fertile waters. Actually, these distinct parts are quite apparent throughout, the group changing angles with quick flicks of the wrist, a capability aided by Sean McCann's (that's right) production, which treats each mode in panoramic color. Actually, the whole Roll Over Rover crew is in here, with Dave "Old Softy" McPeters offering some upright bass and Stewart "Ugly Husbands" Adams on guitar and recorder. Them being alongside fellow explorers Rob Magill, whose saxophone is an important and substantial presence, Natalie Alyse's vocals, Danny Larussa's electric bass, Maura on drums and Teddy Skupien on guitar. It's quite a lineup, and they play together with a surprising delicacy and group interplay. This is no all out cruise fest, but a real group, playing together and off one another in a sort of a careful abandon.

Flip side splits the difference between "Worshiping" and "Repenting," though with all this prayer and worship I'm not quite sure what there is to repent for other than a swell time had. The former of the two sweeps in blustery style, with Magill's sax drifting in the wind with Aylerian attack. A real full blown one here, hollowed out like some clay sphere made for dripping richly colored paints into drop by drop. Rainbow spelunking material that starts to gray up as it descends deeper. And then there's "Repenting," which burns hot like the magma found underneath. Total grooving, churtlting go of it here, with Magill's melodic fragments keeping it taught as can be whilet he backing throbs and retracts in superheated tandem, like some head-nodding fusion group. Amazing, and sure to clear out any of the bad karma you've built up over the course of the record. Do I sense a Love Supreme arch here? Me thinks me does. And when has that ever been a bad thing?
Posted by Henry at 8:13 AM No comments: 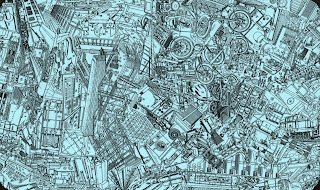 Whoa, just posted that last review and saw that it's September already. Heh, a day late I guess. Still, life approacheth... Given the encroaching cold though (nights definitely are past that mid-summer cooking temp) this one seemed like a good fit despite it's coming from Portland, where I doubt leaves fall at any point during the year--maybe I'm wrong. Either way, this is another one in the new Stunned batch--scratch that, the last batch, a new one already dropped like two weeks after the last one. Regardless it's newish, and this split is one of the best from that recent one, teaming up unknown-to-me Matthew Mullane and his Fabric project with well-known-to-me Frank Baugh and his Sparkling Wide Pressure. Super tag team I might add.

First side belongs to Fabric, which seems like an electronic project pointed towards thick ambient techno structures. First piece, "Long Coat, A Robe," is total open cavern drift, spaced out lasers shooting eternal beams into the dark and lighting galaxies far beyond our own color viewing sensibilities. "And a Borrowed Shirt" takes it down past the night for a second, laying you by some seaside cliff at night, with only blacks and thick blues intermingling with the dark greens of shrubs around you. Beautiful stuff, melodic without even approaching cheesy electro melody ambient stuff. "Wrapped in Silver Rags"--I'm sensing a story in these titles here--goes into some open tuning strum that maintains all the color around the notes that the electronic stuff does, building a bristling drip-world of color that glides as much as it punctures. Everything across these six tracks is as deeply magical and carefully treated as the rest, a delicate balance between sheer sonic energy and guided precision.

The Sparkling Wide Pressure side offers, by contrast, three pieces, each demonstrating the same sense of precision and color but exploring entirely different sound worlds in the process. Equally carefully conceived as the Fabric side, the bit opens with gentle guitar chords loping down some forgotten river, tiny little electronic lights lining the shore, guides through the night. Frank's latest stuff has been stellar, and this seems to be in line with the consistently impressive doings the guy's partaking in of late. Spaced out but comfortable as hell, just settle in and let the wash go over you. Calls to mind a similar secret world as the moon does on its reddest nights, bright and lonely hovering over the hills. Slowly, as the sun goes down and the river widens, the space between shore and waterway merge under feint moonlit indicators, briefly lifting the folding planes a couple inches up, turning it around, and redirecting it toward the stars. Total beauty, great match-up, all around killer times of course. Maybe fall ain't so gloomy after all...
Posted by Henry at 6:17 PM No comments: 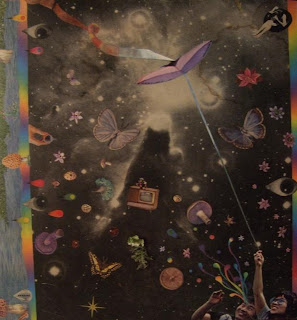 About to head down to New York for the birthday weekend, but first things first. Reviewing must be done. And first on the list is one that I've let slip by for far too long. The last remaining culprit in that first batch of Vanishing Hour stuff, this is actually numero uno in the catalog and it sure is treated as such. DELUXE treatment here, with gnome-conjuring psychedelia as its cover story and super lucid day dream hand-job on the inner sleeve. One of the fairer looking productions I've seen in a while, and it doesn't even look like it broke the bank.

Of course the sounds ain't half bad either, and I've been tooting Jeff Astin of Housecraft's horn for a good stretch now. By the way, anyone know what happened to Housecraft? Site's down and no word... hope it hasn't gone the way of all things... Regardless, this is one of Xiphiidae's nicest outings yet, which is saying something. Moves away a tad from the earth crunch of yore in favor of a more high pitched, white drift vibe. Opening with the nicely titled "Pan Cyan Essence," the album sort of floats through its course, moving from backyard worm digs to pink sunsets over miniature puddle lakes. Deeply psyched stuff that moves into a sort of muddled church takeover as conducted by rainbows and bees. Maybe it's just the cover leaving it impact, but the holy vocal backings and the squiggly, almost Tomutonttu style warbles call to mind a special locale being made more so by a steady infusion of glee. Nice stuff.

The flip presents one extended go of it in the form of "Aeckt Wetting Shower," which lays down some cicada buzz and layered flitting that totally lurks beneath the tumbleweeds like some tiny mystical critter. Reads like some Miyazaki creation or something, totally harmless but mysterious as hell, leaping in and out of eye sight, between this world and the next. Call it a ghost or what have you, but its fuzzy allure is undeniable. Really deep stuff here, highly layered and full of commitment to its cause. More Astin does, more it seems he's moving away from any recognizable influence and into his own pseudo new-age genre. Though to say it calls on what so many of the other new-ageists are pulling from is dead wrong. It's too filtered of any direct connotations, instead just grabbing hold of the general vibe and letting it take hold in his own sound world. Beautiful stuff, absurdly limited to 100. Really, one of the best goes I've had all year. Grab one, I think there are some left at the label operations base. The art alone, but all together it's something special.
Posted by Henry at 5:55 PM 1 comment: