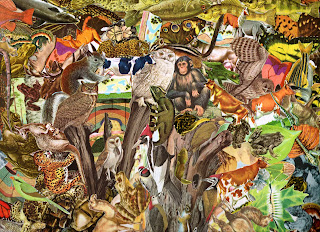 Back in the saddle for a pre-New Years push--been quite a stretch since the last review but there's been no shortage of goodness sent in. My desk is currently overloaded in fact. Been meaning to whittle away at it for ever now but the end of the first term took the wind out of me and then it was season's tidings/writhings time, which of course means any moment found is a moment cherished. Nevertheless, storms have been weathered and reviews may now commence.

Figured I'd kick it back into gear with this one from the now not-so-new Stunned batch. It's been a while since I've gotten to Stunned stuff but, given that it was pretty much my favorite label this year (alongside Holy Cheever and Bug Incision I suppose--a lot more to come from both those camps soon as well...), it only seemed right proper to do it the honor of reinvigorating this here bloggie. What's a further blast is this tape's makeup. Excavations is made up of formidable label heads C.A. Parsons and Nicholas Longworth, who's work with the Offices of Moore and Moore has been most impressive. Killer stuff coming out over there... but killer stuff here as well. As far as I know this is their first delving into public release territory and it's a real nice go.

The whole thing is structured as a bunch of songs believe it or not. And on top of that, those songs are loosely strung together into an honest-to-god album. Moves through some nice stripped back zones too that pull from early/mid-90s lo-fi moves, drone, guitar rock, you name it--it's all wailing and consistently sun embossed. Like some torrid ride that fast forwards you right through this gnarly 9 degree weather and woosh, out into the land of pregnant greenery and tingling blossoms. Utterly listenable stuff for sure, and with enough bite to keep the interesting interested. The best numbers have a rich pop goodness that takes into account the naive melodic sense of so much of the tropical/"hypnagogic" stuff and re-situates it into a real band context with an atmosphere all it's own. Not to mention some serious breadth presented here. Smatterings in between keep it all whoozy enough to get lost in. Only your head can guide the way. Guide on, I suppose, guide on... Surely to remain cruisable deep into 2010.
Posted by Henry at 8:22 AM 1 comment: