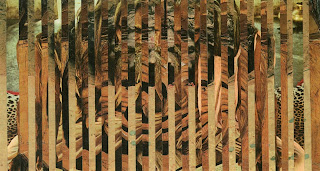 Latest Stunned batch came in recently, which is always good news in my book. And it's a fat batch at that, filled to the brim with slow burners and stunners alike including a disc by Sparkling Wide Pressure that represents the last CD-R to be released by the label. Don't know whether that means they're growing up into real deal CDs and vinyl or sticking with the tape rundown, but changes are afoot it seems. Changes are afoot.

This one comes by way of Torture Corpse aka Robert Kroos, whose grim moniker pretty much sums up his approach. The album's title track gets the ball rolling with a suitably foreboding speech wose pulsing death march beat takes over and leads the thing down a pathway to the vents themselves. Twists and turns of steam and earth merge together, crushing one another and forming new elements in the process. Gnarly go that peters off and in and blows off steam. A real reverberated voyage that feels like a guided tour given on the sickest IMAX ride of your life. "Voyage to the Core of Earth's Crust: Demonic Fires Aligned," narrated by Sigourney Fuckin' Weaver. Love the part where the theater seats rumble and sway as you move through rubble and magma alike. Super heated vibes to be had here for sure, strips itself back, writhes itself forward, zones itself out.

Flip side offers a few more takes on this sound, with "Rock 'N' Rally" opening with a quick quote about the Nuremberg Rallies as rock concert before diffusing into a haze of salt and silt. Washes of texture amount to few phrases but plenty of phases, left to right and back to night. As gloomy as this stuff is--and it is gloomy--it maintains such a high level of sonic richness that it never feels overbearing or destructive. And it ain't really just drone either. More in the dark maximal ambient vein, but hardly so pretentious as such a title might infer either. "Full Responsibility" re-soups the thing with nice ebbs of shattered tone and moans from beneath. Bubbles of bromide that move somewhere between the space echo hollows of Robert Beatty and the field recorded worlds of Douglas Quinn. Lovely. Any safety zones found though are quickly ripped apart on the closing "Manjushri," whose warbling guffaws of blather move as gently as a hammer in a house of glass. The continued entry of vocal speeches is alarming and while I usually find this sort of thing pretentious and a bit of an over working, the careful placement and generally grizzly atmosphere lets it come and go with little detriment to the overall feel. A fine one from the Stunned camp, packaged fantastically as always.
Posted by Henry at 1:08 PM