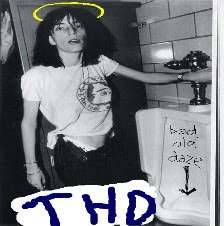 Good news in from Foxy Digitalis:

Call it what you will, but Towering Heroic Dudes has managed to create quite a stirring little piece with this, the follow up to their invincibly titled “My Morning Jackoff” off on Abandon Ship. And with a title like that, who could argue? This release, on stellar label Obsolete Units, features three separate live sets, each about 20 minutes long, featuring the combined degradation of members Neil Vendrick, Nate Rulli, Paul Haney, Andrew Posey and Mick Merszaros. And while the group members might make this appear to be some mid 80s English mod-revival group, the sonic results speak to something quite oppositional to that sort of assumption.

The first set, performed at the legendary Cake Shop on 11/4/08, finds some discombobulated zones and shifts them around to make even less sense. Thick clatter and drone and feedback ring around one another with garbled glee and not a magic bus in sight. The clan sure knows how to raise a ruckus, allowing everything to build and create its own patterns in the grain. To this end, the members are merely physically allowing the billows to happen, erupting outward in torrential shards. Must have been a hell of a show... The following number occurred at Tommy’s Tavern about four months later, and this two grows viciously, albeit in a far steadier, more deadened fashion. No sudden blasts here, just dirt infused simmering till the frog turns to putty. The unit seems to have properly internalized a lot of the L.A.F.M.S. catalogue (namely Airway and Le Forte Four) and reconstructed it to suit their own expansive needs. The last track, recorded at Lil Lounge on 9/17/08, is a buried battering of fuzz and crumble, hushed and mushed and steadily crushed into some phased bandwidths of lowly radio samples and synth statements and hiss scuzz hiss aesthetics. It’s all washed out real nice, so the last 30 second track can blast you straight to Deliriumton. Nice stuff, lots of energy and movement and destroyed right proper as a document.
Posted by Henry at 4:51 PM

Thanks for the sweet review! Very nicely done!

Bihar Board 12th Result 2021 Thanks
Spice Money Login Thanks You.
amcallinone Thanks you Very Much.
Munger News
AMC Clerk Recruitment