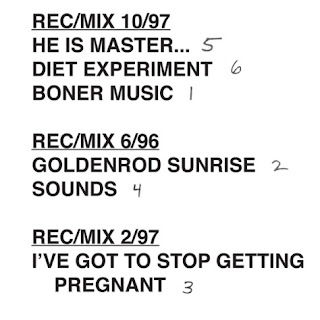 Managed to leave a bunch of reviewables in my girlfriend's car this weekend, including some Stunned / Holy Cheever / ECR / Bug Incision etc. so I've finally got a moment to dig back intot he final I've been sent along the way. This one comes courtesy of mid-90s No-Wave outfit Uphill Gardeners, a trio consisting of Jarrett Silberman, Nigel Lundemo and Bobb Bruno. All these dudes have gone on to big things, but this EP shows how on top of it they've been all along. Killer stuff fully deserving of issue (finally) here.

What we've got is a series of tracks that weren't used for their sole full length CD, but if these are the outtakes they sure don't read as such. Guitar, bass and drums as mobile as you get, full instrumental togetherness. Artsy to be sure, but with enough cajones to get the ball rolling wonderfully. Starting off with the excellently titled "Boner Music," the group displays right off the bat it's penchant for switching modes mid-go, crashing along before turning on a dime into some strange country twine balls that read far more like a Butthole Surfers track than a Mars one. Great mix of those two worlds though. "Goldenrod Sunrise" pulls off the same action, creaming its Gun Club style guitar lines with super nowhere glad-to-be-gone pummeling before "I've Got to Stop Getting Pregnant" slows it down a tad, rollicking in darker and dirtier waters as a two-note bass line and steady drum thud guides the guitar shreds and bellows atop. Electronics and synth are apparently involved here too, but it's tough to define them against the guitar (hell, maybe it's not guitar, who knows?). Slow and steady wins the mace till "Sounds" culls their inner AMM meets Ash Ra Tempel. A weirdo one to initiate flippage to be sure.

Flip side features only two monster tracks, "He is Master" being the first and representing a real rubber band band brawl. Brush it off quick, this one buzzes like bees before changing chords on a pin top and moving into discordant stunners and bummers. Real inner workings stuff that relies solely on its self made logic to guide the way. Slow burn ravaging with hums and strums and crumbs abounding. Gonzo for sure before drums come in and move it into nearly Zappa-esque absurdities that skitter outward with a humor and resilience you can't quite land your thumb down on. Perfect pulse offered from Lundemo on this one. "Diet Experiment" closes it all out with some rib cage bending bass twirps while Silberman's Arto impression pieces itself together atop some skitters and shimmies. Real lovely sounding to my ear, anti-rock with a firm grip on how to navigate such territory with cohesion, balance, and an ear for subtle frames of referential outlooks. Glad to grab, killer killer material. Seek it from the labels and see if they've got em.
Posted by Henry at 11:13 AM

Great review! You captured the album so well.