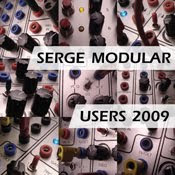 This one's been waiting in the wings I good while, but it's turn has come. Was psyched when I got this disc, and not only cause the Serge is one of my favorite knob-twiddlers around (Richard Teitelbaum had one over at the Bard labs for us to tamper with) but because this is a hell of way to organize a disc. For all the synth-mayhem going around these days, it makes perfect sense to pick one and track it right proper under the hand of slew of fists. Haven't heard of half these guys either, which only adds to the allure.

Spanning fifteen tracks and a FULL disc's worth of sound, this thing is as packed with Serge sounds as you could hope, demonstrating over and over the endless array of possibilities from this thing as well as it's diverse potential depending on who's manning the controls. Thing starts off with Jan-Hinnerk Helms cordially welcoming you via a Serge created voice, friendly as all hell with its sing-song greeting before things dip into circuit mania on M/N/M/L's "Breath," which takes some oscillations and splays them into party cracklers and simmering timber. Super into CRAY (Ross Healy's project) and its "STRK," which bounces around like rubber bands shot through laser beams. Super kinetic and spasmodic for the frenzied fans. John Duval uses it to dip into some early 8-s basement synth material on "Distress Call," which reverberates like a sinking mine sending info to spy subs before self-detonating. Benge's "1972 Serge Modular" (apparently an excerpt from "Twenty Systems") is super minimal and glitchy, little cracks and runs writhing over one another with insect rhythm pulses. Quite grooving really, like some 70s cicada orgy scene soundtrack.

Could keep running straight through really, there're so many zones it's impossible to summarize; kkonkkrete's "Untitled I" lays out under the sun for a tad, charring over in dronesville while cebec culls a veritable techtonic Mutranium disaster on "Transformer Substation." Love the Hans Grusel sound too on "Quarantimes," which is as zoned and burned out as they come. Just rhythms and crashes and march band kitchen sink stuff. Killer. Electronic Waste Product's "Picket Fences" reads like a mid-60s Mimaroglu experiment while Carlos Giffoni's "All the Mistakes I made During the Caribbean Winter" blasts a whole straight through the walls with drenches of sewage before the roaches come crawling out 8-bit style. Maniacal as hell. And of course the rest of them are great too, but I'll let you dig it up for yourself. Hell of an instrument and far removed from any hypnagogic nostalgia sound--far cooler and more electronically motivated. The new sounds played on the old instruments, which were the new sounds then too. Go figure. Killer and likely still available.
Posted by Henry at 9:29 AM

Thanks for the nice Cray review :-)

Do check out our record label VICMOD Records we are big into releasing past and present avant electronics,
http://www.vicmod.net/index.html

We have another 3 releases ready and have in the pipeline amazing array of artists from Robin Fox, Warren Burt, Cor Fuhler and about 20 more releases hopefully by years end.