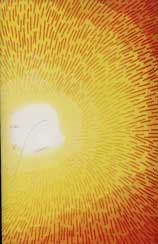 More gargantuan psych out tumultuity from Burnt Hills, this time on serious up and coming label Bum Tapes. With a nice and filled out lineup of six guitars, bass, two drums and of course xylophone, Blunt Greeper does as all Burnt Hills do. Which is to say, ignite the universal vibrations of riffdom and journey into the cavernous depths of the land of Helderberg.

As usual, Burnt Hills opt for the single hour long outing, yet another moment of glory from the scores of Monday jam outs these guys have over in Albany, but again, as with their Morning Glory disc for Ruby Red Editora, Blunt Greeper suggests even greater growth from the unit. Rather than Eric Hardiman on bass here, he works the guitar angle while Eric K. steady's the ship with some mind-numbing bass work that's just right for the kind of scree conjured up by the rest of the band. What's funny though is that among all of the action going on you can tell the players are different--the thing has a different kind of feel, perhaps a little more stable and less elastic than Hardiman's take on the rudder. Which isn't to say it's worse or better; quite the contrary. It just further serves to show the depth that the group has developed and the natural, individual as collective sound they can harness and work under.

As for the guitar sounds here, these are some of the best I've heard from the group--the six axes really slam around, careening all over in fits of ecstatic glory. Whole thing even dissolves at a certain point to some kind of weird quiet(ish) place where the drums and xylophone are left tinkling under waves of guitar blast. Always been a fan of Phil's drumming too, and he shows some serious versatility here too, working up a spasmodic beat only to let it become crushed under its own weight before finding another pocket to hack away at. Actually, the tape features a lot of slowing down and stretching everything way out in to bent and heated metal rings that start to create audio hallucinations reminiscent of some kind of strange tape music as fed through infinite feedback loops. Pretty wild work.

Also have to mention the killer cover art, which could be the sun exploding over the mountains or some huge ball of fire emerging from the distance to speak to you. "Come, it is time for me to light you up." Or maybe it's just your mind on Burnt Hills. Either way, another nice and crusty one from one of the truest practitioners of psychedelic mayhem in the world. It just keeps getting better, and I haven't even heard Microburst or Tonite We Ride yet. How good a title is that? Tonite We Ride. Says it all.
Posted by Henry at 7:05 PM

thanks for all the reviews, sometimes i wish you would upload the releases haha! keep it up.