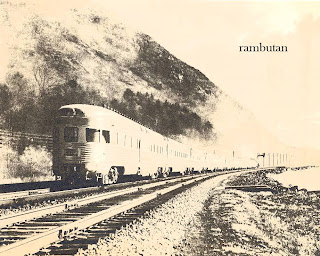 Rambutan is the nom de plume of Eric Hardiman, half of Century Plants and the main man over at Tape Drift. This is the first thing I know of Eric's to be released solo style, and if it's any indication then Rambutan is a name that will be heard from far more often in the coming year.

Whereas Century Plants always burns fairly brightly though, chugging along in a duet of improvised propulsion, and Ray's solo project Fossils from the Sun moves quickly through varying styles and methods, Rambutan sits a bit stiller, opting to tone down the riffage in favor of sheets of tone that stretch far and wide across the disc. "Broken Through the Middle," the first track on the disc and the longest at over eighteen minutes, is all aired out streams of effected vocals and distant clacking railway pulses. Maybe it's the cover art but the whole thing has a bit of a Dead Man, train to nowhere vibe that's bleak and empty enough for anything to happen within it. Long scrawls of rich, straight out of Death Valley tones mix readily with the obscured mutterings of derangement buried beneath the (burnt) hills. Moves nowhere fast just the way I like it.

Keeping on with the loner desert vibe, the second track is a solo guitar twanger that rings warmly, if alone. Pulling from the Mazzacane camp as fed through a kind of No Neck-y haphazard methodology, "Bat Star" is equally alone in its world, ringing around and bouncing off the painted dunes to create a sound all its own that works at its own tempo (i.e. slooow) before fading off into the dust bowl. "Wool Coat" is the shortest track on the disc, but it fills its four minutes well. Thick washes of basement drone congregate among static gestures in a sweeping motion, the tumbleweed to the first track's lonesome cactus. The final title track ends on a darkly foreboding note, and at over seventeen minutes its a real downer of a jam, monolithically slow and maniacally patient. The train's broken down folks, and there's no water to be found.

It's all dry and hot and sticky stuff, basement jams for adobes (do adobes even have basements?). Eric manages to carve out his own sound here, and it's quite a revelation. Beautiful.
Posted by Henry at 1:56 PM

Hey, just came across your blog. I've been enjoying reading. Keep up the good work.
Also, I must add, that Eric Hardiman is the man! The new Burnt Hills CD Tonite We Ride is killer too, though you probably know that already.

Hey, cool to hear from you, I've been enjoying your blog for a while now. Glad you're enjoying the reads over here and keep up the good work on your end.
And yes. Eric's a super dude. Haven't gotten a chance to hear Tonite We Ride yet but really looking forward to it!