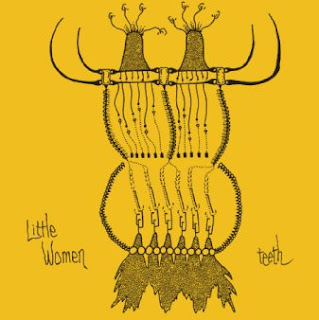 Wow, I did not expect that. Had heard of Little Women, but didn't quite know what I was gonna get in throwing this one on. Assumed this was going to be more of a Pocahaunted / Scorces type thing, but what's in a name eh? This doesn't even come close to the world of Louisa May Alcott.

Actually, Little Women is a quartet consisting of Travis Laplante, Ben Greenberg, Darius Jones and Jason Nazary (not Meg, Jo, Beth and Amy) and their whole deal is far closer to a mixture between Anthony Braxton, Last Exit and the Flying Luttenbachers. Opening with a full on blast of acoustic thunder (sans electric guitar, if that counts...), the album is as together as it gets. Hell, I'd even go so far as to say that this whole thing is composed, though I'm sure there's plenty of improvisation in there--if not it certainly manages to sound like it. The whole piece has an attention-deficient mobility to it, sometimes sounding like a mid-70s quartet, then sounding closer to Bloodcount before ending up with some Zappa-like post-rock workout. Of course none of these tags actually manage to sum up there sound at all, and frankly I'm not going to try and do it; there's too much here.

I can say that I'm fairly sure the group consists of two saxophones, a drummer, and a guitarist, and that all involved are super nasty at what they do. Turning on a dime, from mathy, rhythmic workouts to more textural, AACM or Studio Rivbea workouts, this is some serious stuff. The horns lead the way, but their backing (which, I should note, is often up front) works just as hard, managing to somehow weave these beautiful, driving melodies into more than their math-rock rhythms might suggest. The sheer versatility of these guys brings to mind Zorn's Naked City far more than it does Olson's Graveyards, though at points it does meander into the realm of acoustic panting, quietly murmuring along as horns are substituted for vocal fits and moments of Greg Kelley or Bill Dixon style bleats. Somehow, the group manages to always avoid sounding like their ripping anybody off though. Their abilities are too great and their intensions too honest. While I really can't begin to go into too much detail on it, this is one well worth snagging, especially for those with an ear for the freer end of the jazz spectrum. Some post post-fire music for the basement age. Wild.
Posted by Henry at 12:34 PM