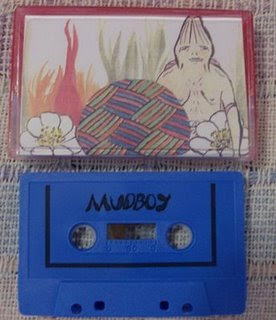 Just got the latest batch in from DNT-meister Tynan, featuring an LP from Black Pus and Foot Village as well as a Bobb Bruno tape. First in my deck was this one though, judging from the last Mudboy 7" I heard as well as all the hype (and killer myspace tracks) from Ducktails' Matt Mondanile. It's a New England lounge delight, providing two different takes on kicking back and calling it a day.

The Mudboy side opts for the more contemplative back porch brewsky approach. Opening with some low murmur and a bunch of nature samples--birds, frogs, crickets--they all mix together before electronic murmurs start to zip around, thickening things up a bit. This nice bass growl keeps a steady pace to the whole work as it drifts--or rather, crawls--along, sounds panning all over with rich stretching and long delays. Nothing like that remix 7" at all, much more pensive and earthly, though hardly without its own droning playfulness. Rather than pulling from the new age angle for its beauty, like so many artists are wont to do lately, Mudboy opts to keep things skittering and hushed, like a soundtrack for some vegetable garden late at night when all the snails and crickets and slugs really have at those morsels under the moon. Or it could be one small cross section of a rain forest floor, an investigation of each little creature and plant that comes to inhabit the area underneath some star-lit palm leaf. Much smaller than the journeyman, Heart of Darkness jungle vibe more commonly presented. As the track drifts off we here the crunching of footsteps in the woods, a fitting close to this lonesome trek.

Ducktails is Matt Mondanile, also of Predator Vision, a Hampshire grad with a typically west coast, sun-drenched tropical take on the whole sound. Here, fitting in quite nicely with Mudboy's side, Mondanile starts with a bassy, navy colored sprawl before synthesized washes of notes glide their way across building themselves up into trance inducing rhythmic motives that ride, just brightly enough to see, across the looping bass sky. Departing from the Corona-in-hand approach of the Breaking World Records 7", Ducktails shifts the setting from day-lit, shades on chill-out to sandy night time ship watching. Cliffs of rhythms build, swaying along as more and more textures are added--a flute now, 80s electronic piano--before, out of nowhere, the whole thing is cut off in favor of a more beat oriented tropical meltdown that still can't remove itself from the cool summer night atmosphere of the previous track. Maybe this is the soundtrack to the end of some all night coming of age movie. Of course that too must end, in favor of a much more contemplative Miami detective soundtrack, drifting along and losing its bearings as the scenes overtake the matter at hand. Or dig the solo guitar work of the next track, somehow meshing right in with it all.

It's another super release from DNT, featuring some of the better work I've heard from these two, though I confess my experience is limited. Still, it's unusual for a split tape to work s well as a whole, but both these dudes manage to keep the summer breeze alive as October comes to a close and the leaves start falling. Beautiful work from a label that only gets better. Nice work all around.
Posted by Henry at 11:14 AM

thanks henry! i will send you my stuff when i get the chance. i lvoe your writing.
best,
matt