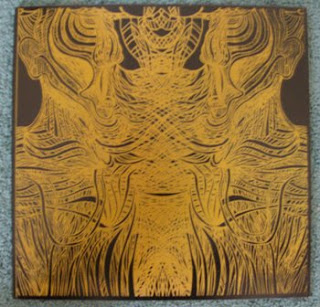 Denmark dronesters Family Underground are an elusive bunch, but their consistently dazed fields of industrial lurch are prominent enough. With releases all over the map (Not Not Fun, Weird Forest, all over really...) the group has a way with dense, thickly metallic drone works that manage to boil the mind right over.

Helium Rug is a single-sided effort for DNT that especially hits the mark as far as these folks are concerned. This is rich and vibrant stuff that manages to both sound mechanic and utterly organic at the same time. Mixing thick, silver drones with rattling maraca, steady hand drum, and vocal moans, the side manages to pull of the same sort of time-bent delirium that some of MV/EE's stuff does, only through utterly disparate means. The percussive backbone, to which the drones and vocals seem to pay no mind, gives the track a kind of tribal vibe despite its imagery conjuring something closer to stealth jets cruising overhead. The Skaters-y vocal yalps, heavily effected, mesh beautifully as the piece slowly bends itself into less propulsive territory. The whole thing actually morphs into a pretty messy cosmic stew, burning away in total delirium. Everything is off here, the percussion playing among themselves while shelves of drone melt across each other over top and odd cat calls blend into some alternate space the likes of which few drone artists are able to carve out for themselves.

Walloping organ drones start to fill the mix, initiating a new slant for the side that starts to sound a bit like James Ferraro covering the Fugs. Weird stuff, but these guys sure have a grip on what they're doing. Absolutely beautiful screened cover art too, some of DNT's best, not to mention the pink spray job on side 2. Sure to get your money's worth too, as this single side is looong so's you can get lost in it right proper. Well worth finding.
Posted by Henry at 12:29 PM