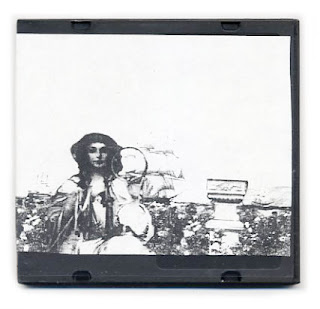 Been on a Skaters tear lately, and managed to dig up a copy of this new one from James under, believe it or not, his own name. His new set of releases has been receiving all sorts of accolades already (this release already got Tip of the Tongue over at VT) and they're right too. The run has been one of James' best, and certainly explores some new territory for the singular mind behind such mind bendingly sweet classics as Edward Flex, Lamborghini Crystal and Pacific Rat Temple Band.

Made of only two tracks, Marble Surf is one long lo-fi ride down the transcendental rivers of Emerald City. Mixing synth piano percussion with choral cries and bellows, Ferraro creates a new age for the new agers. You know that crazy Pillsbury commercial where the dough boy lies back and drifts across this white background with ecstatic floating music sweeping him along? Well it's not far off, at least in effect. It all meets somewhere between Arvo Part, Terry Riley, and the Healing Sounds of Crystal Bowls, only as interpreted through immense draperies of washed out production.

The tracks are split fairly evenly down the middle of the thirty-five minute-ish album, and each track even has a name, a real rarity for these self released Skaters things. That said, the two tracks could practically be one, as "Memory Theater" (not sure if he's referencing the Axolotl album of the same name here or what...) suggests the same fluid haze of languid dementia as "Surf Washing on Spring Marble." Both tracks manage to drift along without ever caring to change too drastically; the sounds present at the beginning are more or less unscathed by the end. It's in the way they intermingle with each other, going in and out of phase to shape and reshape the sounds that keeps it interesting. When new sounds do enter they are hardly recognizable as new, yet they covertly manage to reshape the entire orchestra of sound. Take the arpeggiated run that enters thirteen minutes into the first track. It does not effect the feel, nor the flow of the work at all, but rather slips in as yet another line to follow. The whole thing really builds toward the end with lush, cloud riding string players floating down to do their bidding, creating an atmosphere suggesting some montage of a blissed out woodland romp between satyrs and water nymphs.

As "Surf Washing on Spring Marble" begins to break down with oddly distant fuzzed out pounds (Zeus' thunder perhaps), the thing once again takes on a different light as each shard of astral melody is forced to shine through that much more. The listener, in following these loops that have been going for so much time, is forced to meet the music at an odd place between what is coming into your ears and the memory of what you know is actually back there. This run, and this one in particular, is some of the most overtly beautiful stuff I've heard from either of these guys, and again, it's like nothing anybody else is doing. A monumental release, this is new and smart and fully realized stuff. Here's a wild idea: James is Bill, Spencer's Ted, and The Skaters are Wyld Stallions, the band that will catalyze the coming of a new age in humanity. If only.
Posted by Henry at 10:59 AM

It's all coming true.