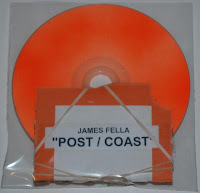 Here's another one from James Fella over at Gilgongo. This disc, which consists only of one thirteen minute track, was intended as a gift to people who helped out with his west coast tour with French Quarter this past June. Couldn't resist throwing up a review of it, if only to give everyone a look at the killer package. Orange, no?

Of course I wouldn't give it the review treatment if I didn't think it was a pretty scrumptious piece of sonic delight, and it sure is that. Recorded in one take (the hiss of the room is super present, and ultimately quite nice), the piece starts as a slowly building ambient pool of guitar loops, and what sounds to me like some sort of synth, though according to the description there isn't any.

The work opens on a gliding slant, just bright and lovely arches of sound floating along. These don't last too long though, as they are quickly interrupted by harsher shards of looped clangs of radio static, demolition explosions and sci-fi lasers. As is Fella's tendency, the piece never settles too long, keeping it interesting in each singular segment while maintaining an air of unpredictability by moving from such seemingly disparate styles in such short periods. When the noisier stuff subsides, an underside of buzzes and kinetic hums is revealed, sounding like a bunch of little Miyazaki characters playing inside some paper mache. The creatures subside too though, leaving only crumpled paper sounds underneath higher end air leaks and door creaks.

The whole thing ends quite nicely with an extended romp into glitch land before cutting off. Again, Fella's managed to squeeze so much into such a short period that the whole thing ends up feeling far grander in scope than it actually is. Another strong effort.
Posted by Henry at 12:06 PM