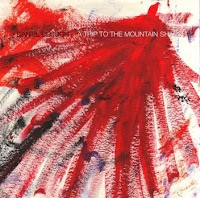 Here's another one from SRA. Really enjoying these discs, especially as head-honcho Nicholas seems to have a clear and righteous agenda of getting new and psychologically effecting music into the hands of people all over. Just check the "about" section on the website if you don't believe me. Given that this particular lens has been provided, it seems particularly apt to view Daniel Clough's A Trip to the Mountain Shark in that vein--needless to say, it works.

I'm not sure exactly who Clough is, but the Brit knows what he's doing with another release out over at Reverb Worship. The first two tracks here lay down some thick static washes that hint at a far more composerly approach than similarly minded material. Bleeps and bloops approach and build into mini melody fragments which emerge out of the dense white noise, giving both tracks a beauty despite the tense, even harsh, atmosphere atmosphere suggested by the tones themselves.

Track three changes the tone quite a bit, starting with a looped string instrument that sounds like some gagaku fragment. Odd whispers and mutterings build behind a wall of distant low end rumbling that eventually grows into a far fuller wash of noise under, over, and on top of which vocals, string clatters, and shards of whatever remains are allowed to bounce in and out of existence. The fourth track similarly begins with a string instrument before delayed guitar mutterings and cello drones build this too. The steady fortification created at the beginnings of this work allows for far greater clarity as the piece descends into a thick cloud of sonic debris. Those small melodic loops presented in the beginning are that much more easily spotted for it.

Track seven might be the most overtly pretty number here, though by the end it too morphs into one gnarly ball of sound. The beginning though presents a series of synth waves a lush as they come. Shards poke through here and there, but mostly this is a benevolent beast, some rainstorm out on the open seas. The production here is strange but ultimately quite effecting, providing a distance to the music, a sort of hushed noise that demands its listener to fill in the gaps it creates. Its steady and logical growth culminates in far more tumultuous territory which the last track tames down and continues to explore.

Given SRA's mission statement, Clough works excellently, though it is equally well suited to those more interested in listening for listening's sake. Clough has an aptitude for allowing each distinct sound's inner chaos to coexist with an arrangement and production that culminates in a distinctive and fully conceived sound all his own, and that's no small task.
Posted by Henry at 6:32 PM