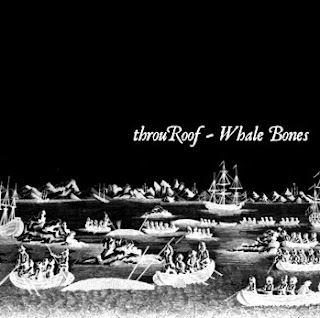 The fine folks over at SRA just sent me a nice little package, including this disc from Italian drone unit throuRoof.

Opting for a thick, textural drone on the first track, throuRoof manage to sound almost entirely barren without losing the organic feel that is their strong point. Expelling dark sheets of low-end rumble on the first track, "Humpback Cemetery Blues," the disc immediately throws itself into a bleak locale that doesn't so much move forward as simply evolve along at a steady pace. Humpback whale cries emerge from the deep blackness before reverberating pulsations shift from speaker to speaker. It's cold down this deep, but there's life in those oceans. Each sound that enters is well chosen, and needs to be considering the precipice the piece rests on. Relying on its broad sonic sweeps and the utter slowness of its development--perhaps the track's most important trait--the piece eventually begins moving toward the shallows, with bright piano taps delayed over increasingly bright, luminous drones before ending in a convoluted reef of color shards.

The second part of the two-part sweet is entitled "Sing the Last Dream," and represents the brighter side of Whale Bones. Rather than habitate the same deep sea, black shawl realm as the previous track this one seems to suggest the open seas, blue and crystalline, with giant beasts roaming the waters. Given the similar pacing and methodology, it becomes ever clearer how adept throuRoof is at controlling their beasts, opting for the vertical movement of tones to drive the horizontal one. "Sing the Last Dream" represents a beautiful, ambient infused synth work; at one point, the beautiful solo brings to mind whale songs whether you know the album title or not. It's deep and majestic stuff that works well without becoming cheesy "whale song" music in the least. Rather, throuRoof use the whale as a jumping off point by which to explore something far broader in scope, and thus far closer to something really special. The end only raises further questions, as whale cries emerge from the newly abundant blackness before drifting off with the waves.

Limited to 100 copies, the disc should still be available from the label. A beautiful one.
Posted by Henry at 11:39 AM