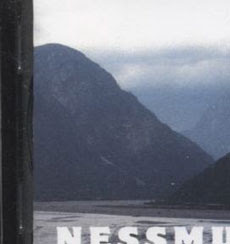 Another package just arrived, this time from Nate of Abandon Ship Records. The label's been releasing great stuff for a while now, it's latest batch consisting of four 3"ers (two from Ray and Eric of Century Plants solo projects respectively) and two from Digitalis head Brad Rose's Ajilsvga and North Sea. Thought I'd start with this little 3" though, a format that seems perfectly suited to this kind of small, side project related experiment.

In this case, Nessmuk is the side project of Evening Fires and The Clear Spots member Kevin Moist as joined by a few friends. It's a funny little disc, spanning under twenty minutes but moving quite a ways in that time. I don't know if Nessmuk is some Viking god or the name of some titanic whale of yore, but the whole thing definitely has a kind of frigid feel to it. The first track, "Station Signals," opens on this clicking rhythm which stays the whole way through, becoming wrapped in guitar lines and echoing gestures of great beauty. Voices mumble about in the distance, but this is largely a guitar based work with warm rich delta twangs entering in at about the halfway mark. Something like a jam between Emeralds' guitarist Mark McGuire and Lambsbread Zac Davis as it vaults itself into riff territory towards the end.

The second track, aptly titled "The Diamond Hard Grindstone of Heaven," opens a bit more chaotically, with rich guitar staccato drones and heavy riffage going on above. There seems to be some distant synthesizer drone too, but if it's there it's so buried that it really only serves as a filling tone. This tends towards a more aggresive, garage style solo that only reveals its under-workings when it subsides, where there exists a whole slew of textural material. Some real guitar fireworks here, but rather than heat it's still chilly stuff, likely due to the blue-green tones he's working in here.

"Everything Living Grows" closes the disc, starting things off on a quieter and more meditative slant, with weird skitterings and low end undulations beneath a field of guitar meandering. Really well placed layer work here, keeping the whole thing unexpected and intriguing as it goes along. By the end though, this too has built itself into a real monster. As each musical cell combines, a glacier of sound is created, walking a fine line between late night chill out and zonk out riff fest. A good one for sure, with much more to come from Abandon Ship. Pretty sure this one's still available from their website if you're into it though.
Posted by Henry at 2:12 PM