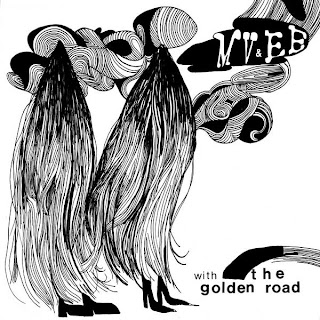 Been meaning to get to these guys for a while. The first MV & EE album I ever picked up was the time-warped Moon Jook way back, so when I realized that the group also had a vocal, folk song slant rather than the John Fahey as fried by the sun vibe of that record, I was pretty surprised. Of course they do both varieties as well as anyone, so this 7", which would surely fall into the latter, folk song pocket of their work, doesn't come close to disappointing.

The first track, "Moment Spacing," is a quick tune complete with girl backup singers doing the whole "oo-la-la-la" thing amongst the flowers and melting cucumbers while Matt Valentine steers the ship with his heartfelt, sun dazed vocals. Given their base up in Brattleboro, VT, it's fitting that this is some fruit-of-the-earth stuff with a heavy back porch, sip some acid spiked ginger root tea feeling to it. Cute, but at least personally this side's sole purpose is to set the stage for side two.

The second side is the same song slowed way down and stretched all the way out. Fittingly, it's renamed "Bong Judge." Actually, this take on the song is hardly recognizable from the other one save the lyrics. Rather than the high-end instrumental cooing beneath the earthy, Valentine vocals of the previous one, here the background is all bass-y, elongated and drunk as hell while the vocals are a bit more airy and drunker. Everything is so slow that it all kind of warbles around, highlighting every tiny overlap of instrumental goodness. The tea's sunk in at last turning any Neil Young vibes of the previous track into, well, MV & EE, splayed out in their hammocks, still sipping.

Nice cover, and perhaps the sturdiest 7" I've ever held. The thing's practically thicker than it is wide, providing those extra deep grooves for you to sink into. Yum.
Posted by Henry at 12:59 PM

Do you have an upload of this, mate?