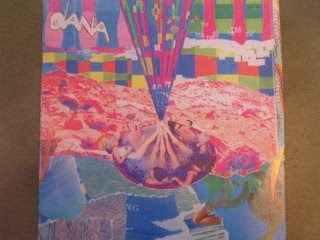 Figured I'd throw up a post on this disc I just got from fellow Bard harbingers of bliss Dana, aka Charlie and Ryan, aka Righteous Bros. They copped me a copy of Adult Weekend at a recent gig we played with them and the thing slays through and through, zooming through its eighteen candy-coated LSD-spiked tracks in a little over half an hour.

Opting for the kind of sample-happy pedal music that proponents of Black Dice and Panda Bear go crazy for, Dana bring their own sound to the mix, aesthetically falling somewhere between the rainbow colored digital mayhem of Paper Rad, the maximalist onslaught of Edward Flex and the glitchy mobility and sonic lushness of Boredoms as covered by Timbaland. From the first track, "Peace Age," which builds itself up from bassy utterances into kinetic glee, the album is one big dance party for the psychedelically minded. Melodies sweep across the rhythmic overdose underneath, each beat being given its own sloppy, wet sound as the whole thing statically pulses onward. Or take the jungle lurch of "WFN," a brief foray into Keith Hudson's "Hunting" territory before "Digz" kicks out the jams in true crunk mode with pogo sound effects galore bouncing off the elastic walls of your mem(brain). "Bodies are Diamonds" starts off like the soundtrack to some Frogger cloud level or Richard Simmons' mind on acid, losing its rhythm almost immediately in favor of a ride on the backs of Care Bears down the river of glee. Once you hear "Concern Burger" you know exactly what that title sounds like, with slinking bass lines and claps mixed between garbled voices echoing off into eternity.

"Bug (Wish On Your Life)" features some woman's vocalizings before Charlie and Ryan's voices emerge to lead into a monolith of mutterances that stop and start over keyboard gestures and thick slabs of gunky sticky sound vibrations, blissed to eternity. "Carousel" spins laxidasically for a minute before "Dan7 (Alex Dream)" enters like Eno's "Big Ship" once did, only this time the waters are purple and the ship is propelled by sea gulls. Truly gorgeous gestures before the closing "Imaginate" leads us off into our own Dana mind-states to further contemplate the journey.

In taking this compositional method towards its extreme, Dana provide the world with a distinct vision as steeped in African polyrhythms and mystic talismans as it is in hash fueled dance parties held on island beaches in the mind. A real beauty--if you want a copy I'm sure you can get one through their Myspace.
Posted by Henry at 9:54 AM